Topolò (Topolove Slovene Topolove Slovenian local dialect and Topolove in compromise form adopted for road signs) is the most populous part of the municipality of Grimacco.

Topolò the village is located in the extreme eastern part of the province of Udine, a short distance from the border with the Republic of Slovenia.

It was mentioned in a document from 1275 as part of the funds of Conon and Volrico of Mumigliano.

The village is built on a steep slope 580 meters s.l.m. and it is situated between the mountains and San Martino Colovrat; near it flowing streams Za Velin Celan, Patok and Za Traunim that, over the millennia, have dug the Codariana valley. The country was linked with the valley floor only with walking paths and trails until 1953, when it was inaugurated the current municipal road that connects with the Clodig capital and then to the road which leads to the Friuli plain. The old paths are now an integral part of the Path Italy identified with the CAI number 746 (which goes to the town of Drenchia) and high vacuum path Valli del Natisone number 745 (addressed to the municipality of Savogna).

The Topoluove name derives from "poplar" (topol in Slovene and Tapu in local Slovenian dialect) and indicates a rich soil of poplar / poplar trees.

The town of Topolò has suffered, like other countries of the Natisone Valleys, a strong process of depopulation, which began in the late nineteenth century and continued with greater intensity in the second half of the twentieth century, due in part to common grounds to all the Italian mountainous areas, and partly to special reasons related to the resulting hardness of living for the nearby iron curtain (the Italian-Yugoslav border). The male population began to emigrate en masse, first abroad and in particular to Germany, Belgium, Australia and the Americas, and later to other Italian regions and the Friuli plain that offered better job prospects. The girls spread to Europe where they worked as domestic workers (dikle in the local dialect). The inhabitants in 1891 consisted of 490 units, dropped to 243 in 1900, to 296 in 1908, 264 in 1961 and reduced finally to 36 (16 males and 20 females) in December 2007.

• It is very interesting to visit the country itself as characterized by stone buildings typical spontaneous architecture of the Venetian Slovenia. Walking through the cobbled cobbled streets you can admire the houses made of rectangular and marked with wooden balconies and external stairs. The ground floor generally consists of a kitchen (formerly called "smoke room" since it has no fireplace) and a dining area (izba) heated by the furnace (peč). On the first floor are made of the rooms, once reached, via the external staircase and balcony used, even to dried legumes and maize products from the family. Many homes have been recently restored thanks to European Union funding and constitute a "hotel model spread". Among the rural buildings are still visible several buildings in stone and wood, "hayrack" calls, which were used for the custody of the tools used for the cultivation of fields and drying of hay and agricultural products.

Topolò the village was reported by the German magazine GEO Saison dedicated to tourism as one of the ten most beautiful villages in Italy.

• Interesting is the church of St. Michael built in 1847 by the villagers without external support, using stone material extracted from local quarries. On the front you can see a mosaic depicting St. Christopher; They are located within three dedicated altars, the major, to St. Michael and the two side respectively to St. Joseph and the Blessed Virgin. On the left wall, a large terracotta altarpiece depicting the Nativity, work created in 2006 by sculptor Isidoro Col. From the church Frescoes executed by the Friulian painter Antonio Gentilini.

• Also of interest is the path that leads to the neighboring Slovenian town of Livek (Luico) which for many years has been barred from the border and is now an art trail with twelve installations expressly made by artists of different nationalities.

• Tired, yet attractive, is the walk along the creek Codariana flowing pure water and rich in trout. Along the way we meet the gorge of "Velik Suopota", marked by two cascades of remarkable beauty, providing high vertical walls carved out of rock by the stream current. At the end of the gully you can observe the waterfall, smaller, called "Mali Suopota". Further upstream, along the left bank, are also visible remains, fairly preserved even in the walls of an old mill and its manor house. The complex, in operation until 1956, suffered considerable damage due to the earthquake in Friuli in 1976 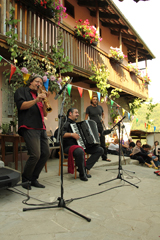 Every year in Topolò, during the months of July, is held "Station Topolò - Postaja Topolove" a small-sized laboratory that combines experimenting with archaism of an ancient culture and environmental force that hosts it. Everything that happens to life from direct contact with the place, which becomes the main engine (and not scenario) event. Everything takes place in the meadows, in the squares, along the streets and in the houses of the village, using what there is; without stages, theaters and no schedules, "after sunset", "afternoon", "in the evening", "in the dark": the only times known by the station. And in real-imaginary places such as the airport, the 5 embassies, the Institute of topology and paesologia, the post office to states of consciousness, the waiting room for writers and directors in transit, the Global Workshop of Health , the Institute for Water, the Universal Art Gallery, the 'University, the library for books of the heart, the ancient synagogues, the baths, the hostel for the sounds neglected: a luxury in a country where there are no shops , bars, or bus, at the end of the road. Workshops and events are free.