In the 11th century the first of several waves of farmers and shepherds of Slavonic stock descended into the Valleys through the passes of Polava, Solarie and Climaz. During the Patriarchate of Aquileia and until the 13th century, the vallies of the Erbezzo and Cosizza rivers belonged to the feud of Henricus dictus Birbiz of Cividale; subsequently, and until the end of the 18th century, they had their own autonomous democratic administration under the supervision of the Banca di Merso (a sort of parliament or general council for common and judicial affairs).

Among the main cultural assets the parish church of San Leonardo is definitely worth a visit; the church dates back to 1351, and has a richly adorned baroque marble altar and two lateral wooden altars. Also a must for a visit: the church of San Giusto in Scrutto, and San Bartolomeo Apostolo, a 19th century church in Clastra.

Traces of frescoes are found in the church S. Antonio in Bergagnacco. The church S. Andrea Apostolo in Cravero is particularly appealing for its architecture and its magnificent polychrome wooden altar (17th c.). 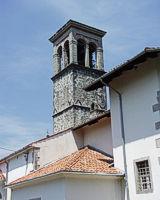