The stronghold of San Giovanni d'Antro was part of the defense line of Decima Regio Venetia et Histria. The Leicht tells us that at Antro there were three castles:

· The one next to the cave, with the ruins of which were built the houses in the hamlet of San Giovanni (now Antro);

· One called Ahrensperg, prope Antrum, which stands on the height above Biacis;

· The one listed in the Abbot Bianchi documents, existing in 1274 and destroyed in 1295.

From the set of existing walls you can see that the building is elevated three floors until you reach the height of the walking surface of the underground church.  On the wall up in the cliff you can see the holes that line the beams supporting the floor of the rooms. The entrance to the castle had to be through a wooden retractable staircase that linked the stone staircase at the entrance. This can be deduced from the fact that today's steps meet the threshold of a door.  In the fort still it exists an oven that gives us an indication of the fact that the place was inhabited permanently. At this strategic site you can only be given a military character or function of refuge for the inhabitants of neighboring countries during the invasions that have occurred over the centuries on this territory. 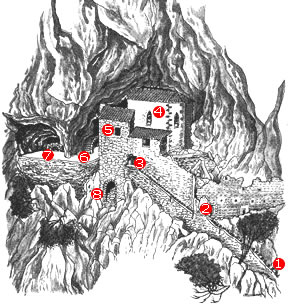 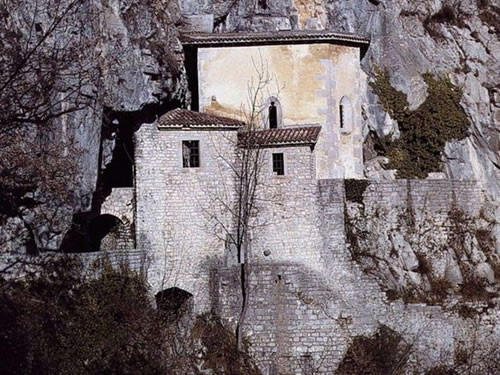 The legend of the Queen

Cave was the last refuge from invasions. This can also be deduced from the legend passed down the besieged queen in the cave, identified by different authors, sometimes of Slavic ancestry (Vida) and Lombard (Theodolinda) opposed to Attila king of the Hungarians. This queen, throwing off the cliff on the attackers plenty of grain (the last one) said, we have so many sacks of grain as there are grains of this. The intent was to make the enemy believe the presence of a large amount of supplies, such as to prevent the conquest of the castle by starvation. The ruse worked, the enemies rose up the siege and the defenders were able to leave the cave and back to the countries.

In the first part of the cave we have been obtained an underground church and a side chapel. The latter comes to us with the gothic setting of 'last restoration in 1477. The floor of the present church stone slabs is supported by a stone cryptoporticus, extraordinary construction that allowed the use of the cave avoiding the flooding of the underground river. The classroom, formed laterally from the rock walls, has a length of sixteen meters and a width of ten. On the walls shows a flower with six petals inscribed in a circle. This symbol, along with a cross with equal arms and a face of Christ is the only presence in the frescoed church. The wooden altar dates from the seventeenth century.

In the side chapel on the south wall, it is arranged a tombstone buried cheindica the name, the name of the church and other useful references. to 'identification of the primitive placement. Previously, the plaque acted as a sill at an arched window. Probably this was not the original site as the words quoted in the epigraph: ... TUMULATUS ... AD FUNDAMENTA ... suggest or to the church floor or the foundations of the ancient wall of the chapel which rest on the rock, a floor below the current floor, the entrance of the complex. Another indication of this location makes we can infer from the epigraph where men are cited ASCENDENTES ET DESCENDENTES ... to which the buried asks to pray for his sins: this confirms the attendance of the church and the stone arrangement in a tomb place visited by those who entered. The incision Iaceo indignus HIC TUMULATUS EGO FELIX ... (Happy I have shamefully buried ...) it leads us to identify this character with the deacon Felix mentioned in a donation of King Berenger the 888. With this document the king grants to religious the church of St. John in the cave and the part of the Natisone valley (from S.Quirino bridge Stupizza).

The inscription of the plaque also indicates the 'name of the church ECCLAE IOHIS BAPTISTAE AC EVANGELlSTE, bringing us back to a foundation of the same to the Lombards hand. The site also had to have for the Lombards strategic function since, echoing the Roman defense line, was an outpost of Forum Julii (Cividale).

Land symbols are the characters who support the shaped ceiling climbs: to The side chapel consists of a single room of m. X 6.48 m. 3.60 with polygonal apse to the sides of m. 1.54.  You enter through a large pointed arch Gothic arch, going a step that raises the brick floor threshold. The arch is built of gray limestone blocks, octagonal shaped faces and interrupted by a capital with shelf. Another step separates the auletta from the presbytery where there is an altar with a stone table. And 'illuminated by two unique Gothic lancet windows, which open to about two meters, respectively south-east of the sanctuary and to the south the classroom. On the ceiling of the chapel we find different symbols:

· The sky identified by the celestial figures

· Crowned the Madonna with Child and a "Christ the Teacher" with the Gospel;

· The sun opposed the moon and the stars.

· An innkeeper with pitcher and glass embossed on the shoulder;

· Two prophets with a long beard and scroll to end;

· A pilgrim with a stick;

· A female figure with her hands resting on his knees (resting state) which, in all probability is the feast day;

· A figure with hands clasped in prayer.

These characters are all portrayed kneeling as a sign of devotion. All the stone decoration was to be painted, but today you can see only mild traces of color. Ancient medieval decoration there remain several layers of fresco paintings:

· The first and oldest layer, signed in red clay, is leaking from pots with palm trees at the side an inscription in Greek and only five per hooked spokes (wheels of fire) are developed along all the walls in a rising wave ;

· The top layer consists of a fragment of a fresco on which you can glimpse the long-haired heads of San Giovanni Battista, perhaps the thirteenth century, the consecration crosses inscribed in a circle and, in the south wall at the top, a small fragment ( perhaps a crucifixion). From these decorations we sense that these parts of the wall were not the subject of the works carried out in 1477