With just 13.4 km2 Drenchia is the smallest municipality of the Natisone Valleys, but also the one that offers the most scenic views. It lies in the north-eastern end of the Valli, connecting them to the Isonzo-valley via the Solarie pass.

Its position on the border between Italy and Slovenia has caused it to be the scene of battles during both World Wars. On the mountain ridge of the Colovrat the trenches are still visible, as are many war memorials. In Casoni solarie, a small ward of the administrative area of Drenchia, a monument reminds the visitors of the first Italian soldier who died in World War I. 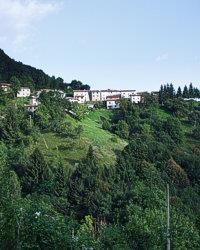 From an artistic and historical point of view, the parish church of S. Maria Assunta in Cras is certainly worth a visit. The 18th century church has a façade subdivided by four pilaster strips and closed by a fronton.

Also noteworthy: some private houses that still retain the architectural features that are typical for the Valli, with many open-air frescoes reflecting the religious sentiment of the population. Many of these houses - to a large extent restored after the 1976 earthquake - are found in the localities Peternel, Obenetto, Lase and Oznebrida.